Friday night. I picked up my phone to troubling news from my mother.

“I debated the entire day whether I should tell you this. I don’t want you to worry too much — I know how you get — but I realized that you deserve to know because you’re family. Besides, you might become more upset if I kept the news from you.”

“What?” I asked as I sat down to prepare for the news. “Tell me what happened!”

“Your father is in the hospital…”

The tears immediately welled up in my eyes. I tried my best to keep my composure as I asked her to tell me what happened. 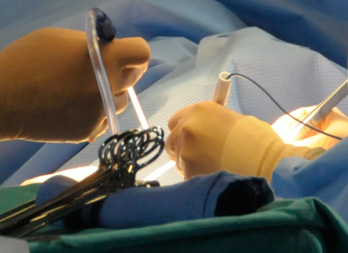 As long-time readers know, my father suffers from chronic hepatitis B, which is a disease that affects 1 in 10 Asian-Americans. Although the deterioration of his liver has plateaued somewhat in the past year, his liver is still nowhere as well as it should be.

One of the unfavorable side effects of an inflamed liver is that it has trouble properly processing all the blood that passes through it — as a result, blood flow can become compromised as the body becomes confused and starts using the smaller vessels instead of the larger, major vessels.

In my father’s case (and I am told that this is not too uncommon with hepatitis patients), some of the tiny blood vessels that line the esophagus had swelled up in attempting to perform their new role, could not handle the pressure, and ruptured. He had spent Thursday night vomiting and spitting up blood, and was admitted to the hospital on Friday.

In order to stop the bleeding, the doctors performed a procedure that literally blocks off the offending vessels. According to my sister (who took my father to the hospital) the surgery lasted all of 15 minutes and my father looked much better within just an hour.

This is actually not the first time this has happened — our family had gone through the same ordeal last year, when six of my father’s blood vessels had ruptured. This time, four vessels had burst, but my father will have to endure the procedure once more in a couple of weeks, because the surgeon had found another two vessels that looked to be in danger of rupture.

There are about a hundred blood vessels that line the esophagus, so the loss of these twelve vessels is not detrimental to my father’s health. However, this is most likely to continue to happen, and soon the level of blood that reaches my father’s brain will start to become compromised.

As a result, my father’s doctor recommended that he place himself on the waiting list for a liver transplant.

When my father’s condition took a turn for the worse three years ago, our family had discussed the possibility of a transplant. I happily volunteered myself to be tested, because I am the only one in our immediate family whose blood type is compatible to that of my father’s. Besides, isn’t his body more likely to accept my liver because we are family?

However, my father vehemently refused my offer. J then stepped up and volunteered to be tested as well (we had just recently gotten engaged at this time) and father became visibly upset. He raised his voice and almost shouted at us that the discussion was now closed. Later, my mother would tell me that she had caught my father with tears in his eyes that night.

Now that I am about to become a mother, I am certain that my father will be even more against my donating a slab of my liver. And I’m pretty sure that J will be opposed to it as well, as I will be our baby’s primary caretaker for at least the next couple of years.

On Saturday, J and I visited my father at the hospital.

“You’re going to be a grandfather soon. I want you to be able to play with my daughter and watch her grow up. You need to take care of yourself. Please cut back on your working hours, keep your stress levels to a minimum, and start attending church more regularly with mom,” I begged my father as I sat by his bed.

He agreed, and informed me that he will be placing himself on the waiting list for a liver transplant shortly. There are up to a hundred factors that the transplant committee will take into consideration — the first of which is the urgency of the patient’s condition — including lifestyle, age, general health, number of dependents, and so forth. And despite what the medical dramas and movies say, an organ transplant is a very complicated procedure without a good certainty of success. There is also the fact that my father would probably have a difficult recovery and would need to be on anti-rejection meds for the rest of his life.

However, if a transplant will give my father some extra years, I am all for it. And I pray that he will become approved for a transplant, and that donated liver will become available to him soon.

J and I stayed at the hospital long enough to see my father get discharged, and drove him home. My eyes stung with tears once again during the drive as I realized how much it must hurt my mother to not to be able to be by my father’s side because there is no one else who can watch the stores.

We considered canceling my baby shower which was set for the next day. However, my mother urged me to keep the plans. Although she had planned on preparing several dishes for the shower, she opted to order the food through a catering company instead.

The baby shower was wonderful, and I have to give HUGE props to my sister who not only planned the event, but decorated our home and prepared more than half the dishes. I was overwhelmed by the love and generosity of our friends and family — there was no doubt in my mind that our baby is already loved and welcomed by so many.

I tried my best to keep a smile the entire party. But I have to admit that it was difficult at times. Both of J’s parents had recently had surgery too, so the health of the baby’s grandparents weighed heavily on my mind. At the same time, I felt glad…I was happy that I am able to provide for our parents a grandchild, a new life to focus on and give them renewed hope.

24 Responses to “An Emotional Weekend”