It was a perfect time to start – with J’s birthday, another close friend’s birthday, and the lunar new year coming up, I wanted to paint cards for these occassions. A fantastic way to save money and squeeze out some creativity juice!

So I busted out my ArtBin Upscale 3 Tray Box, travel easel, and box of goauche paints.

(Goauche is my favorite painting medium. They’re perfect for illustrations!)

The living room became a disaster area while I commenced work, but I was very pleased with the results.

Unfortunately, I forgot to take a picture of my friend’s card before I mailed it. And J’s birthday card contains an inside joke that wouldn’t make sense to anyone but us.

However, I figure the Chinese New Year card I painted for my in-laws deserves to have a spotlight on this blog: 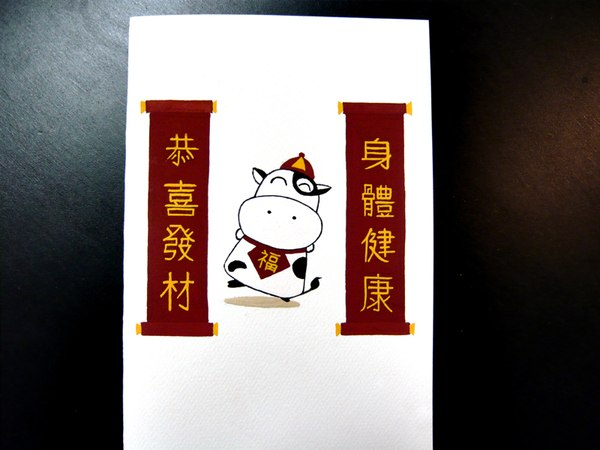 Now it is nowhere as gorgeous as the eye-popping creations of Kelly, but I like to think that I haven’t completely lost my touch after over a 5-year hiatus from painting.

The Chinese characters were the most difficult, since I had never been trained in brush calligraphy and the only thin brush in my arsenal was pretty flimsy. In addition, since I do not know Chinese these characters may resemble something that a second grader might write.

However, the smile on J’s face when I showed him the finished product was all worth it. I hope my in-laws like it as well!