I have been looking forward to this coming Tuesday (July 14) since the beginning of the year. What is so special about the 14th, you ask?

One of my all-time favorite TV shows, MTV’s The State, will finally be released on DVD!

For those who are not familiar with the show, The State was an hour-long comedy sketch show that aired on MTV from 1993-1995. The cast consisted of 11 comedians who wrote, acted, directed, and edited the show.

During a time when life consisted of pimples, oily bangs, and braces, The State was one of my favorite escapes – an hour where a shy, nerdy girl could seek solace from the harsh reality of teenage angst and partake in a culture that embraced individualism, sarcasm, and silliness…all while poking fun at the pop culture that I so longed to understand and awkwardly embrace.

Earlier this week, Michael Ian Black (one of the members of The State) shared on his blog a glowing review of the DVD set, with a title that aptly read, “Wow. This Review Almost Made Me Cry.” Go read it now, because I cannot agree more with everything that has bee said in this review, as I wholeheartedly repeat that The State is “probably the best thing MTV’s ever aired.”

The icing on the cake? According to TVShowsOnDVD.com, the following image fills the first screen of the first DVD of The State: 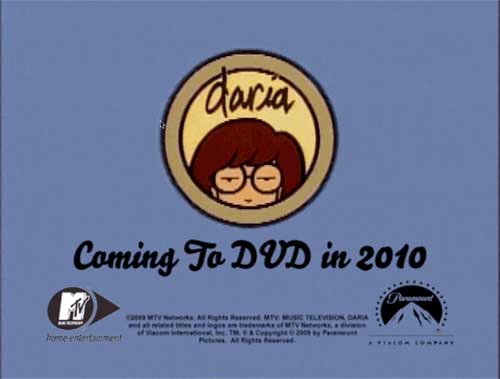 Daria…another one of my all-time favorite shows, will finally be released next year!

You all know what I’ll be doing come Tuesday…I urge you to pick up a copy yourselves!