Late last year J and I made the decision to cancel our cable. Not because we had stopped watching TV, but because we were no longer watching our favorite shows as they air. Sure, the DVR that our cable company had provided was getting a lot of mileage, but we couldn’t ignore the fact that the majority of the shows we enjoy are available — for free — online.

So what is the best way to live cable-free in a technologically-driven household? Well, this is how we did it…

1. Connect a media computer to your television.

There are some great media streaming devices on the market today (Boxee, Roku, and Apple TV to name a few). However, we decided to go for an actual computer instead because a computer allows us to play DVDs, downloaded videos in practically any format, in addition to everything that a media streaming device would do.

J considered building our own computer. But after calculating all the parts we would need, we decided that getting a Mac Mini would be comparable in cost. 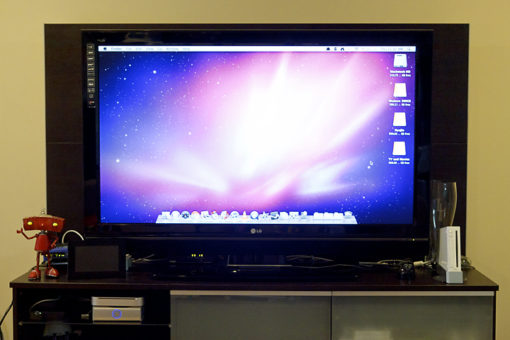 Our Mac Mini is directly connected to our television via an HDMI port, so technically, we are using our television as a giant LCD monitor. The image quality is great and having a 52″ screen to do the occasional Photoshop work ain’t too bad either.

2. Invest in a wireless keyboard and a mouse.

With the keyboard, we decided to keep it simple and purchased the Apple Wireless Keyboard. It’s small, unobtrusive, and perfect for what we need. 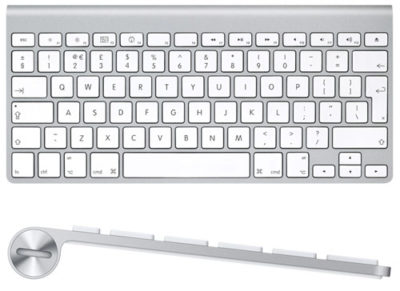 We went a fancier route with the mouse: the Logitech MX Air. When J first described it to me, I asked him, “You want to spend HOW MUCH for a mouse?!!” But once I tried it out in person, I was hooked.

What’s so special about a computer mouse, you ask? Well, the MX Air is designed to be used by home theater PC users and presentations by tracking motion even after you lift it off a surface. Which means you can hold it just as you would a remote control. 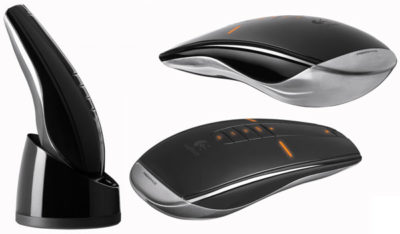 The buttons that run down the middle of the mouse can function as playback controls, and the smooth surface where the scroll button would be is actually a touch panel sensor where you can slide your finger up and down.

And for those who are wondering — yes, it can be used exactly how you would use a regular computer mouse too. I find that I use it on a mousepad (or directly on our couch

) when doing “computer” work, and lift it and use it as a remote when watching videos.

For the rare occasions when we are able to watch a television program as it airs, we use an HD antenna.

The very first time that we hooked up the antenna to our television, we couldn’t believe our eyes — the picture quality was better than what we had with cable! And while the channel selection was limited (which was expected), we were able to pick up a few channels that we would’ve had to pay extra with our cable company, e.g. a Korean channel and a Chinese channel.

We went with the Terk HDTVa Indoor Amplified HD Antenna due to is popularity and positive reviews on Amazon. But we have also heard that a $20 HD antenna from Walmart works just as fine, so I don’t think an antenna makes that much of a difference if you live in, or near a metropolitan area.

4. Subscribe to a video streaming service (or two…or three).

We’re currently subscribed to Netflix‘s $7.99/month unlimited streaming plan. We’re pretty happy with the service — the quality is better than we had expected, and there is practically no lagging. That being said, we do wish that more older movies and shows would be available for streaming (and not just on DVD, which we would need to pay extra for).

We watch most television shows which have already aired on Hulu. Again, the quality is pretty good (the picture quality on Hulu is better than that of most network websites that are streaming the same shows) and I wouldn’t be lying if I said that I have been tempted to subscribe to Hulu Plus on more than one occasion.

I have also recently discovered that with my Amazon Prime membership, I have access to over 5,000 commercial-free, streaming movies and TV shows.

We scour the web for websites that stream live sports games. We download television shows that are not available on Netflix or Hulu. We’ve also discovered new programs and movies that we would have never known about if we hadn’t canceled cable.

And that’s how we did it. Sure, the initial setup cost quite a bit a money, but considering that we were paying almost $90/month for cable, the investment has evened out after a few months.

« A Half-Assed Update
The (Incorrect) Western Interpretation of Asian... »