Last night’s girls night out was one of the craziest in recent memory.

I won’t go into too much details, but suffice it to say that I stumbled home at an unreasonable hour and spent a good portion of the morning hugging the toilet.

Although we had made dinner plans, my friend E told me to meet her for $10 manis & martinis at Beauty Bar. I had read about this establishment before but it had seemed a bit too “girly” for my tastes.

In addition, I hadn’t had a manicure in about a decade – I have an issue with strangers touching me (I even refuse to get facials or massages) and I was a bit nervous.

However, I was in dire need of some girl-on-girl time. Well that, and the $10 price tag for a drink and a manicure won me over.

Perhaps it was the strong liquor coursing through my veins (on an empty stomach, no less).

Perhaps it was the dark, slightly goth but utterly chill environment (not girly at all).

Or maybe it was all the comments about how a dark color will look great on my white hands (flattery goes a long way).

Whatever the reason, the bartender, the manicurist, and E convinced me to choose a bright and shimmery shade of red. 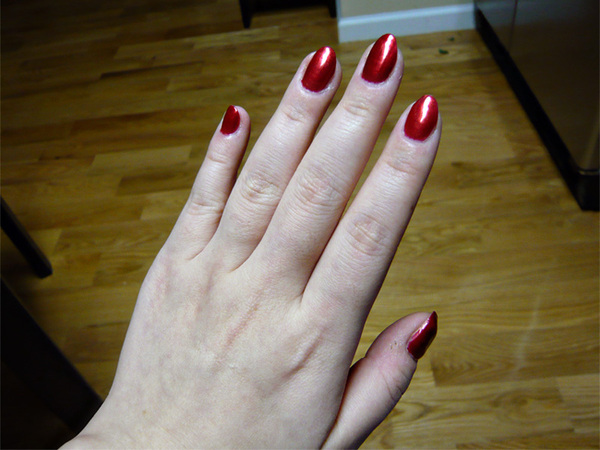 I had to take a picture because painting my nails in this attention-grabbing red is so uncharacteristic of me. Who knows when I will do this again?

However, I have to admit that red nails did give me a shot of adrenaline and a boost of confidence. I felt like a vixen, and found myself using my hands more often throughout the night. Gesticulating during conversations. An added touch here and there to prove a point.

Who knew how much influence a little nail color can have over me?

One Response to “My Vixen Nails”