Our Fixed Dog, A Horrible Night, and Small Miracles

I only got 2½ hours of sleep the night before the procedure. I have always been a sensitive sleeper (ie, not being able to sleep well the night before trips) and with growing concern for my little guy, coupled with a bad case of pregnancy-related indigestion, I simply could not rest easy.

We dropped Comang off at the animal hospital at 8:30am and were instructed to call back after 3:30pm, when he would be coming out of anesthesia. I called exactly at 3:31 and was relieved beyond a doubt to hear that the surgery had gone well. The vet wanted to keep an eye on him for another couple of hours to make sure there were no complications, and so directed me to come pick him up after 5:30pm.

I was delighted to find a bright and alert Comang at the animal hospital. Our vet (love him, btw) showed me the sutures, gave me instructions for post-op care, and once again remarked at what a well-behaved dog Comang is. After handing me a bottle of painkillers, the doc cleared us for discharge.

Immediately upon arrival at home, I tried to take Comang out on a short walk so that he could relieve himself. He refused. It seemed that the pain was starting to kick in…

As soon as we entered our condo, Comang squatted and pooped on the floor. He had never pooped in the house before, and was obviously very ashamed of it. He walked on over to the kitchen and hid behind the table. I urged him to come out — “It’s okay, buddy! I know you’re not feeling well! Don’t worry about it!” — and after a few minutes, he slowly made his way over to his mommy.

The vet had instructed me to give Comang his pain meds only after he had eaten. Comang was to be given a small meal that night so that I can start him on his painkillers…however, he REFUSED to eat. I placed all of his favorite treats in front of him, and even tried to put them in his mouth but he spat it all out.

“PLEASE eat,” I begged him. “I can’t give you your pain meds until you eat…”

Comang ignored my pleas and so I gingerly placed him on the couch. He was shivering — a combination of the aftereffects of anesthesia and pain — and looked so miserable that I didn’t know what to do. I arranged some blankets around and over him so that he would stay warm, sat myself down on the cold hard floor beside the couch and slowly petted him until his eyes started to close.

I remained in this position until J arrived 2 hours later. He came home to found his dog shivering and in pain, and his wife crying and repeated whispering “I’m so sorry” to the dog.

I was exhausted from lack of sleep (I hadn’t been able to nap that day) but I insisted on sleeping on the couch for the night, next to Comang. I didn’t want him sleeping on our bed as he usually does because the bed is higher and thus carries more potential for our little guy to hurt himself should he try to jump off.

At around 3:00am I awoke and saw that Comang was no longer beside me. I thought I heard him in the guest bedroom, so I made my way over there and flipped on the lights.

He had peed, pooped, and thrown up on the bed.

Once again he looked horribly ashamed of himself. I didn’t scold him at all, but he certainly acted like I had screamed at him and did a walk of shame to his crate. He refused to come out of the crate for the rest of the night, even through both my and J’s urging.

I didn’t want the stains to settle into the bedcovers, so I stripped everything off and started the wash. 10 minutes later, I heard a weird tut tut tut sound coming from our washer-dryer unit…then silence. I smelled smoke.

I ran over and fiddled with the dials. Nothing. It seemed our washer had died with its contents still soaking wet and soapy inside.

Frustrated, I headed over to my laptop to try to get a number for a handyman for me to call in the morning. But wait — why wasn’t my internet working? I reset the router and played around with the settings in order to get our wireless connection up and running again. I’m usually good with technology and have no trouble diagnosing connection problems, but nothing seemed to be working.

At this point I started to cry again and decided to wake up my husband. He tried to encourage Comang to come out of his crate but was unsuccessful. He took a quick look at the washer and said that we’ll get someone to fix it, or just buy a new one. He tried to fix our wireless issue but couldn’t figure it out (and he is the guy that all our friends go to whenever they have issues with their internet!)…

“I’ll take care of everything in the morning. GO TO SLEEP,” he told me.

I fell asleep praying to God that He will bring with the morning sun a renewed, better day for our family.

A few hours later, I awoke to the sound of Comang scratching at the side of the guest bed. I took this as a sign that he needed to pee, so I decided to take him on a walk.

He wasn’t nearly as energetic as he usually is, but he seemed A LOT better than the night before. He looked happy to be outside and to be able to relieve himself; I couldn’t help but smile through my fatigue.

As soon as we returned I tried feeding him again…and he ate! It was only a little bit, but he did and I praised him like he had just found the cure for cancer. I immediately gave him a painkiller afterwards and I felt better knowing that his pain will subside soon.

I headed over to the washer to check if the water from the bedcovers had drained somewhat. I had figured that I could take them to a coin-operated laundromat later in the day to get everything washed and dried. However, something told me to try turning it on again…

…AND IT WORKED! I was able to finish the wash cycle without a problem!

Not only that, but our wireless connection had managed mysteriously fix itself too.

I have no idea what happened in the 4 hours between our discovering the problems and waking up to find everything working fine. I know that I didn’t imagine the smell of smoke from the washer, because J smelled it too. And as far as our internet, we didn’t do anything additional to it aside from just going to sleep. All I can do is chalk it up to small miracles. Praise God!

Comang looks to be doing A LOT better. The only thing of concern at the moment is that he seems a bit miffed at me. “Mommy, this was YOUR idea. Daddy was against it the whole time. And you’re the one who always brings me to the mean vet. I’m so mad at you right now…” 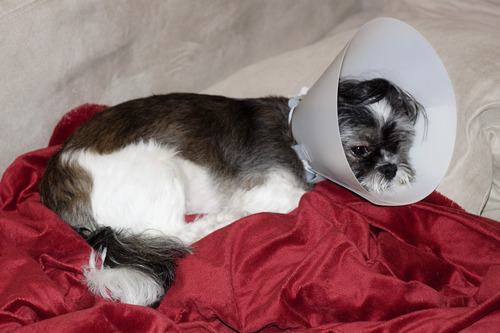 Comang continues to give me dirty looks and doesn’t seem nearly as cuddly towards me as he usually is. And this morning, as J left for work, the little guy seemed simply devastated to see his daddy go. “Don’t leave me alone with mommy! Mommy’s mean to me!” And as J bent down to tie his shoes Comang firmly planted himself between J’s legs as if to say, “Ha! You can’t tie your shoes now! You have to stay!”

Our dog has never acted like this before. Usually he could care less as J leaves for work because he knows I’ll still be around. Sigh.

It certainly was a rough night and I’m glad that it’s over. And while it may seem like mere coincidences and/or inevitable events to some people, I’m fully convinced that God did answer my prayer. Now if only I can get Comang to like me again…

12 Responses to “Our Fixed Dog, A Horrible Night, and Small Miracles”