Last month I received a phone call from my dad. This is how the conversation went:

Dad: Jenny I want a smartphone.

GiH: That’s great. What kind do you want?

GiH: Okay, but there are many different types of smartphones. Do you have a specific brand in mind?

Dad: The one that my friends have.

My parents are typical Korean immigrants in their 50s with very little exposure, let alone experience, with technology. My dad has a laptop, but he mostly uses it to check the security camera feeds connected to his store. Sure, he visits Korean news sites but this also means that J and I are constantly asked to “fix” the computer (ie, remove all the malware and spyware my dad has inadvertently downloaded).

My mother still can’t differentiate between email addresses and web URLs. It isn’t uncommon for her to read/see/hear an ad, call me, and ask me to check out the product/services in more detail by visiting the website…and she’ll give me an email address instead.

They get confused if a gadget or appliance has more than just a power cord. J and I bought them a nice GPS system — in Korean, no less — but they’re still afraid to use it. They know that I have a blog, but they don’t quite understand what a blog is and they never visit this site (probably because they do not remember the URL and do not know how to bookmark sites in their web browsers). 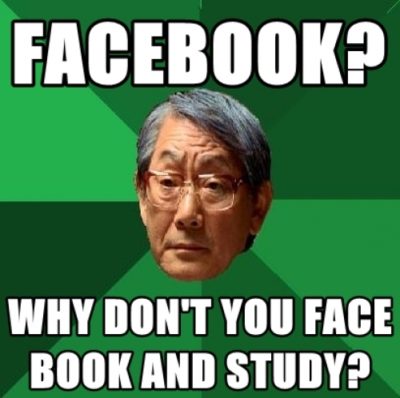 Then, a couple of weeks ago I received a Facebook friend request from my mother. Uh-oh.

The very next day I got the following text message from my sister:

Mom wants you to accept her friend request on fb.

YES mom is on fb.

Soon, I began to see her all over my Facebook news feed. She was friending people left and right (mostly family members, but also her friends’ children as well as a bunch of my sister’s friends) and writing mundane stuff on our mutual friends’ profiles (eg, “Have you guys eaten dinner yet? What did you eat?” Except in Korean.)

It got worse when last week, my sister gifted both parents with iPhone 3Gs.

They both immediately sent me texts. And continued to send me texts…all the time.

My mother used to call me 2-3x a day whenever she got bored at work. Now, she writes on my Facebook or sends me text messages instead. And according to my sister, she will send my sister texts from the next room.

My father takes pictures and videos of Claire so that he can show them off to his friends. He’s even managed to find various Korean iPhone apps and is constantly fiddling around with them.

This is not to say that my parents are now tech-savvy; they’re far from it. My mother still doesn’t understand the concept of downloading photos to the computer or phone. Instead, she will take pictures of the photos and save them in her phone. My father still thinks that Facebook is a photo-sharing site. And they both still shout into their cell phones because they believe that such small devices do not have the power to properly amplify their voices.

And in instances such as these, all you can do is smile and ignore it. Only later, when you have some extra time and have taken an extra dose of patience pills, can you try to explain it to them in a way that they will understand.

How are you parents’ knowledge of today’s technology? Are they socially connected via Facebook, Twitter, etc? Do you chat with you over instant messages? Send you text messages? Own smartphones?

17 Responses to “Parents and Technology”