Top 5 Star Wars Designs and What Inspired Them

The world of Star Wars is beautifully designed and rendered – a haven for scifi enthusiasts and a mecca for creativity.

As always, behind every good design is an inspiration. So here is my choice of the top 5 best designs from Star Wars and the inspiration behind each design.

Leia’s gold bikini is one of the most popular costumes in pop culture. The image, burned into the minds of thousands of adolescents who had flocked to see Return of the Jedi in 1983, remains a phenomenon even to this day, with websites such as Leia’s Metal Bikini celebrating the famed slave costume.

The original had two versions, both of which were custom-made from a cast of Carrie Fisher’s torso. The first was an actual metal piece worn when inactive, and the other made of a rubber material for ease and comfort while doing stunts.

Designer Aggie Guerard Rodgers cites artist Frank Frazetta as her biggest inspiration for the bikini. Browsing through his gallery, one can certainly see the resemblance. This print, in particular, with the flowing skirt-piece, spoke to me: 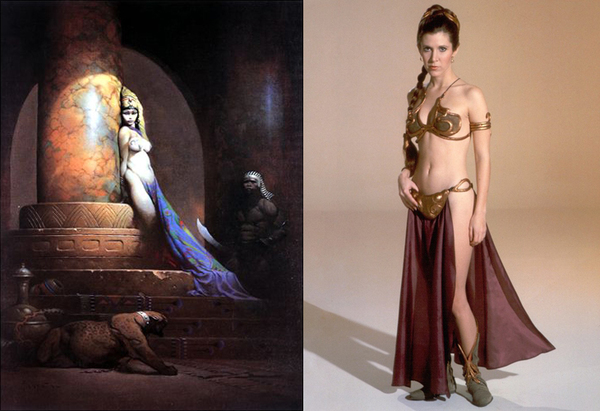 One of the most iconic villains in film history, Darth Vader’s costume is a perfect fuse of the old (gusoku samurai) and new (scifi technology). As such, the inspiration behind the costume is one of the most well-known among fans. 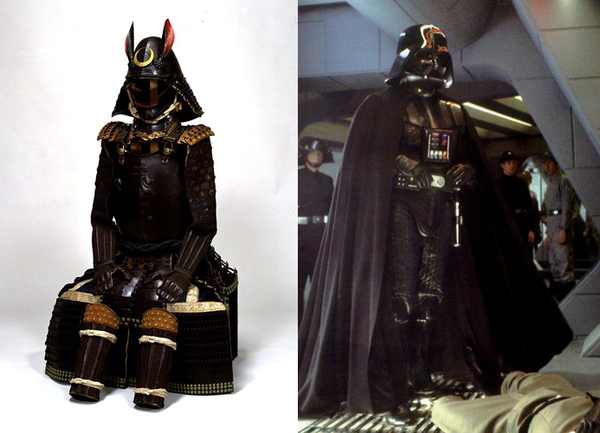 The Yoshitoku Company has taken it a step further and even created a Darth Vader Samurai! 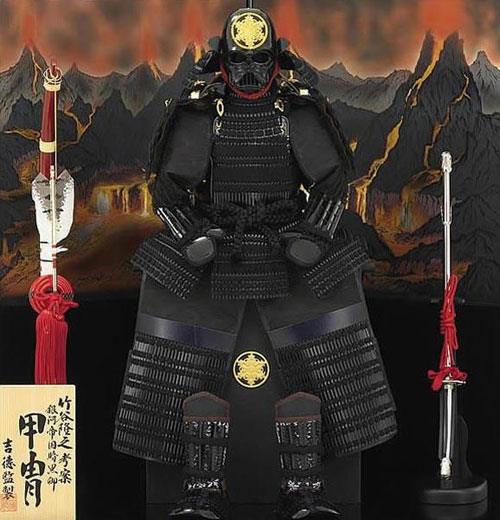 Who hasn’t grabbed a long ruler, an antennae, or a broom to swing it around like a lightsaber while making buzzing and wooshing sounds? I mean, I’m not the only one…right?

According to Wikipedia, the lightsaber is most likely inspired by the “Force-Blade,” which was introduced in Issac Asimov’s “Lucky Star” series of science fiction books. However, the physical design for the lightsaber seems to have derived from none other than Star Trek. The handle looks similar to the universal translator, while the blade seems to take from the effect created by phasers. 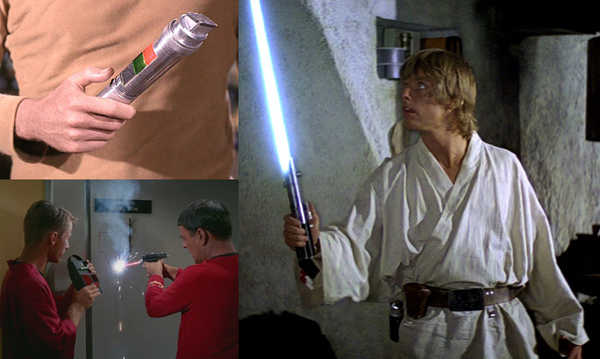 The wise Jedi master Yoda. Heard of him, you surely have. Hmmm? The Merlin to Luke’s Arthur. The Dumbledore to Luke’s Harry. And a damn good fighter in a tiny body.

In 1980, George Lucas approached makeup artist Stuart Freeborn and asked him to make a puppet. Freeborn proceeded to model Yoda after his own head, and added Albert Einstein’s eyes and winkles to add to the “wise look.”

The end result became one of the most beloved characters in film history, and in my humble opinion, one of the best designed puppets of all time.

I let out a gasp when I saw General Grievous for the first time…and another one during his last battle scene. His body is mostly robotic, built with powerful droid technology, save for his brain, nervous system, and sensory systems, which remain the only organic reminders of his previous life as Qymaen jai Sheelal.

Grievous is one of my favorite characters and I believe it to be the best designed character in all of Episodes 1-3.  His part man, part machine form hints at what Anakin will become, and even his cough foreshadows Vader’s trademark breathing.

And to think…the inspiration for the shape of his head came from a spray bottle! 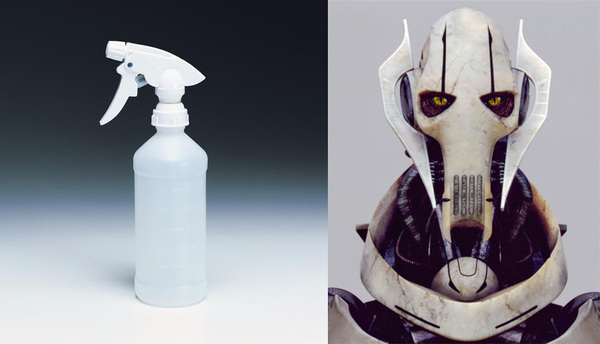