The Sony PS3 has been out for 3 days now but I will not be getting one. Why? The available game titles do not look too exciting. It costs an inordinate amount of money. Plus, the Nintendo Wii was launched just 2 days later and I had been drooling over it ever since it was announced at E3 2005.

I can go on and on about the superiority of the Wii over the PS3. Suffice it to say, Nintendo never ceases to amaze me with their creativity (look how well the DS is doing!) and marketing efforts. Nintendo has built up a community of die-hard loyal fans of all ages who have been interacting in all sorts of ways through the DS, and now they can build another macro-community through the Wii.

Not to mention, Nintendo fans tend to be a lot nicer than your run-of-the-mill PS3 fan, as illustrated by this week’s xkcd: 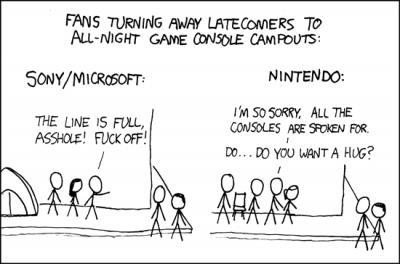 Yesterday, J, our friend BJ, and I woke up at an insane hour so we could make it to the Target in Columbia for the launch of the Nintendo Wii. We had been scouting the local Best Buy’s, Target’s, Toys ‘r Us’s, Walmart’s, etc. for days to see which would be getting the most units in on launch day, and the Columbia Target it was.

I stopped by my local Dunkin Donuts to pick up coffee for the three of us and to buy a box of donuts to be shared among the crowd (there you go – the friendly Nintendo mentality). However, this might have been a waste of precious time, by the time we arrived, there was already a line… 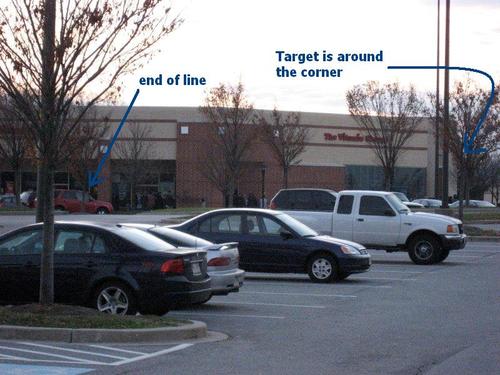 Notice that the actual entrance to the store is around the corner. There were tents set up at the beginning of the line. Oh em gee.

At around 7am, the manager of the store came out to tell us that they had exactly 120 units in stock. BJ quickly ran around counting. God had decided to play a cruel joke on us that day: we were numbers 121, 122, and 123.

We made a mad dash to the Toys ‘r Us that was across the street. Fortunately, the line here was shorter because the store wasn’t scheduled to open until 10am as opposed to Target’s 8am. Here is a shot of the people in front of us, which was only about 30: 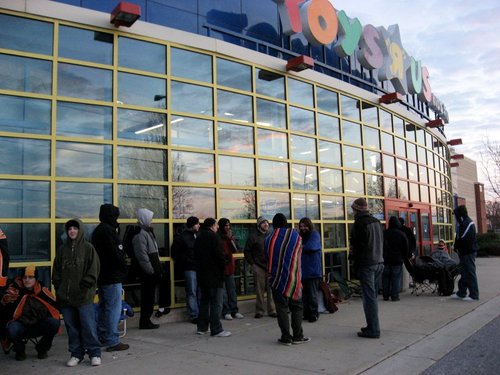 We kept ourselves busy by chatting up our neighbors in line. We had also brought our respective DS’s and proceeded to kill some time by playing some rounds against one another. Our line neighbors even joined in for a few games! And, of course, I kicked everyone’s ass in Meteos.

Here’s a shot of us, looking like ass with so little sleep and waiting outside in the cold for hours: 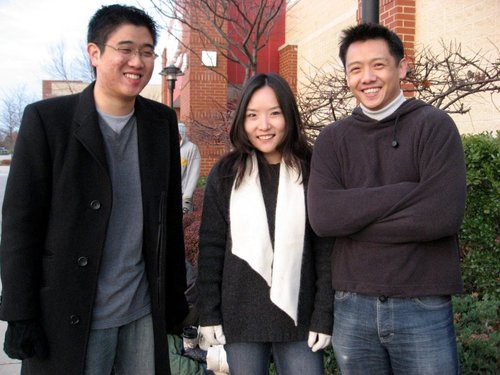 They finally started handing out tickets at around 9:30 – 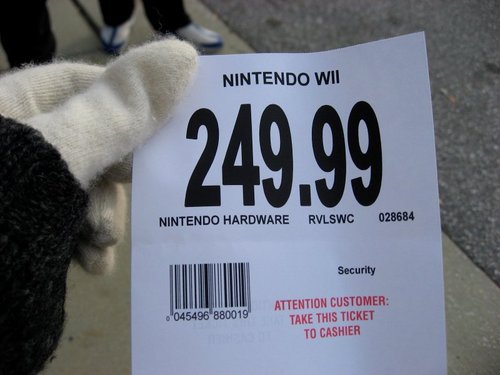 After that, they let us suffer for another hour while they SLOWLY let in groups of 2-5.

Unfortunately, being poor, I only got one game (Zelda) in addition to the console. I had been planning on getting at least one extra set of controllers but they’re sold out everywhere in MD!

It’s ok, because playing with it yesterday, it was definitely worth it.