My MacBook Pro was still an infant at 1.5 months old.

During my honeymoon, I noticed a black dot on the upper right-hand side of the screen. I immediately whipped out my iKlear travel singles and wiped and wiped…with no avail. I changed the background image, played movies over the dot, and dragged windows repeatedly over it.

It was a dead pixel.

Needless to say I was very upset, especially because I knew that Apple (like many other LCD vendors) would not replace an LCD for just one dead pixel.

(Normally, one dead pixel is hardly noticeable and should not cause much concern. However, I do a lot of design work on my MacBook Pro…I need the screen exact to my specifications. My OCD nature doesn’t help either.)

My LCD troubles only grew from there.

Was it the Mediterranean air? The sea breeze? I have no idea.

All I know is that the next day, I opened my laptop to wake it from sleep to find alternating light and dark vertical “stripes” extending from the bottom of the screen. 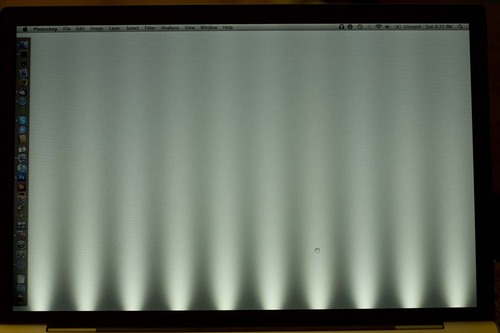 (This isn’t a picture of my screen, but this is exactly what the problem looked like…
I found this image in this Apple support discussion board, which cites the problem as
faulty LED backlights.)

I panicked and called out to J, who is better at diagnosing hardware problems. He proceeded to calm me down and rebooted the machine.

…or so I thought.

Over the next couple of weeks the vertical stripes reappeared a few more times. Each time, the problem disappeared upon reboot.

Now, the dead pixel and the occasional backlight problem are more nuisances than real disasters. Everything else about the MacBook Pro was PERFECT.

However, I had never experienced anything like this in my 4-year relationship with my PowerBook G4. In addition, I expect better from Apple.

So today, I headed over to the Apple Store in Chelsea where I had originally picked up my baby. I made an appointment with the Genius Bar and waited.

Derek, the technician who called out my name, was an absolute darling. He was courteous and knowledgeable, never once talking down to me as many tech support guys have in the past.

On my side, I did my best to remain calm and collected, even managing a few smiles and jokes. I tried to be as detailed as possible in my explanations and politely informed him of my disappointment over a machine that was still quite new.

Apple has a strict 14-day return policy. However, I was still under the 90-day complimentary support period so I kept my fingers crossed.

Derek excused himself while he conferred with a manager. He returned with great news: since my laptop was still fairly new, and the problem seemed to be a hardware issue, they will give me a replacement Macbook Pro at no charge! They even switched out the upgraded memory so that my new laptop will have the 4 GB of RAM that I had purchased separately.

Apple…have I told you lately that I love you?

I have a brand new MacBook Pro to play with this weekend!

2 Responses to “Apple Replaced My MacBook Pro for Free!”