The comic is pretty funny by itself, but the comments on it are hilariously accurate too! Here’s my favorite:

IE10 is like the friend that said he would show up to the party early and bring tons of booze that everyone can have, but shows up 3 hours late with a 40 of king kobra for himself.

Meanwhile, your good, reliable, friend Firefox just said he would show up, and ended up bringing 2 kegs because he wanted to.

Safari and opera showed up together. They aren’t the coolest, but they are fun to have around at parties. They don’t start drama, and are pretty nice to everyone. They brought wine spritzers though…

Chrome came an hour late, but that doesn’t matter because he’s good fun. He brought a whole shit ton of liquor that everybody can have because liquor is quicker, ya know? (ie10 will inevitably steal and take home an unopened bottle of this at the end of the night) He’s a little weird though because he somehow knows something about everybody….

Edit: Hey, somebody should probably call an ambulance. Netscape is passed out on the couch and hasn’t moved for quite awhile.

I’m starting to get annoyed at Chrome. When she moved in, she was petite and not really in my way. Now she keeps allocating space in different places for herself and I’m running out. I have to toss out her trash all the time.

She is also really jealous and you suspect that she is reading all of your emails and texts.

Plus she keeps letting door to door salesmen in to talk to you about their products.

And, on a related note… 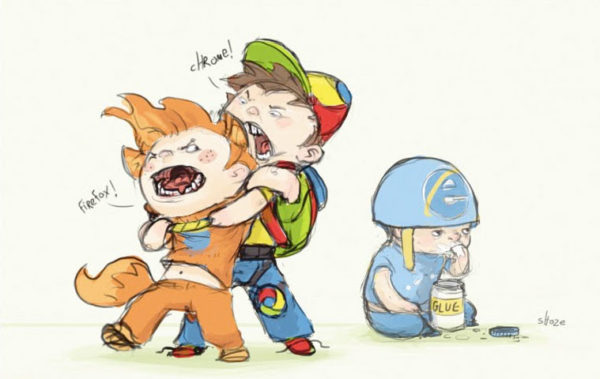