Today I’m pleased to welcome another blogger whose guest posts I’ve tremendously enjoyed in the past: fellow geek girl Susan! I still remember when the word “geek” was viewed negatively by society; now, geeks everywhere proudly wear this label as a badge of honor. So if you too are a geek — and a girl geek at that — take a look at this post and be proud of who you are!

I’m really excited to be a guest blogger here at Geek in Heels. One of the reasons I enjoy Jenny’s blog so much is that she wears her geekdom proudly and I can identify with that. She’s also not afraid to admit that she loves non geeky things. I think that’s true of most the geeks out there, even the ones that don’t admit it. I’m sure even Stephen Hawking has a favorite brain cell killing activity like watching Real Housewives of New Jersey. It’s been a while now since guy geeks have transitioned from Revenge of the Nerds to actually being cool. Now it’s our turn, ladies. 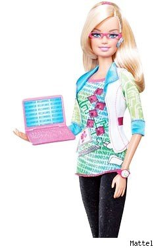 It started out slowly. First there were the lovable freaks portrayed by Tiny Fey and Amy Poehler on their successful TV shows. While maybe not specifically geeky, they definitely weren’t your typical vapid female sitcom characters. After a contest to pick her next career asked every day women for their opinion, Computer Engineer Barbie was released. Then all those sexy Star Wars costumes started showing up everywhere. Sure, a guy probably designed the Sexy Wookie costume. But the fact that anyone is even making such a thing points to a wider acceptance of women who actually know what a Wookie is. This October saw the first ever GeekGirlCon. We even have our own book, Geek Girls Unite, which was just released.

Our whole culture is becoming more geeky (or tech savvy if you prefer). Celebrities are on Twitter; e-Readers, iPads and smart phones are the norm. It’s cool to flash your latest gadget and trick it out with as many apps as possible. Even my father in law, who doesn’t like his work-mandated smart phone because it’s too complicated, is obsessed with Angry Birds. During a recent company meeting he and his coworkers spent half their time discussing how to beat various levels of the game.

All this technology isn’t just for tech heads; it’s for everybody and it’s really fun. So it makes sense that right now is our moment to shine.

The geek girl is the new “it” girl. We’ve always been funny, smart and beautiful. Now the rest of the world has finally caught on to what we’ve known the whole time. It’s also pretty cool.

2 Responses to “Guest Post: Rise of the Geek Girl”