Not the Brightest Bulb in the Room

I love your dog…I just wanted to share that! I have a shih tzu myself and I’m not sure if it is the breed or if it’s the fact that i dropped him on his head as a puppy but he’s definitely not the brightest! Love him just the same though!

So I became inspired to write about my dim-witted dog…

My sister once told me that the reason shih tzus are not very smart is due to their inbreeding.

The shih tzu breed originated from China and was once solely owned by Chinese royalty. Due to their association with imperial China, the breed almost died when the Communist Revolution began. In fact, every shih tzu today can be traced back to fourteen dogs — seven male and seven female — from this period in history. 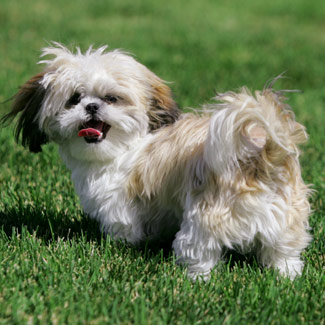 Not Comang, but a random picture of a
shih tzu puppy I found online.

Although J and I always wanted a dog, a shih tzu is not a breed we would have picked. J prefers large dogs such as labradors and German shepherds — a “manly” breed that he could wrestle with and not be afraid to hurt. I prefer smaller breeds mostly due to my own diminutive size; however, I despise small yapping dogs.

For these reasons, we had compromised on a pug or a small bulldog a long time ago.

However, when the opportunity to take Comang came up, we couldn’t resist. We had previously dog-sat him for two weeks, and knew that he was house-broken and relatively well-behaved. We knew he was healthy and low-maintenance…and most importantly, he needed a good home.

Ever the advocate of pet adoption over pet stores or breeders (we once drove 3 hours to adopt a guinea pig…no joke), we decided to go for it and welcomed Comang into our lives. 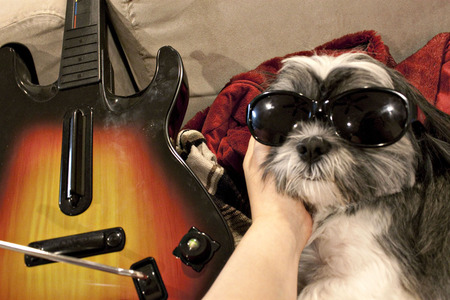 J and I often joke that Comang is not the brightest dog. Sometimes I get concerned that we’re being being mean, but this is the truth! When I look into the eyes of most dogs, I see intelligence. When I look into Comang’s eyes, I see vacant confusion.

He chases his own tail. He forgets commands if we don’t enforce them every day. Sometimes when one of us steps out of the room only to return momentarily, he will act like we just returned home from a week-long trip.

And you know that cute ‘cocking the head to one side’ thing that most dogs do when they’re confused? Comang never does that. Do you know why? Because he’s constantly confused!

However, we can’t deny that he is one of the best-behaved dogs we have ever seen. He has never destroyed our property save for an errant tissue here and there. He has never had an accident in the house (except when Dante is around). He will never touch human food, even if we leave it lying around, wide open, with no supervision.

Perhaps his good behavior stems from his low IQ; for as they say, ignorance is bliss. 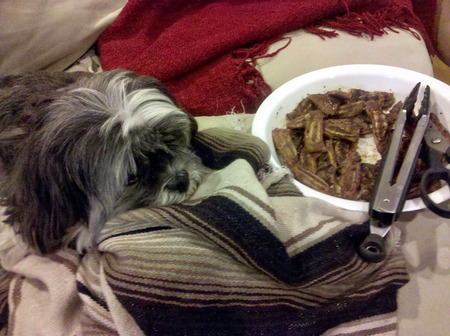 Evidence that Comang will never touch human food. Here he lies with a plate of leftover kalbi (Korean BBQ short ribs) in front of him and he is falling asleep.

So yes. Comang is definitely not the brightest bulb in the room, but we love him just the same. No one else could instantly make a crappy day better by greeting us with such exuberance at the door. No one else could take over the best spot on the bed and not make us angry. No one else could fart right on my face, only to have me laugh it off.

J’s mother suggested getting rid of Comang since we have a baby on the way. I vehemently refused, because Comang has been our first baby and I fully consider him a part of my family. I imagine our children playing with him as they grow older, enriching their lives as he has bettered ours.

Are you a dog owner? If so, is he/she intelligent and well-behaved?

13 Responses to “Not the Brightest Bulb in the Room”