Street Fighter Chronicles: What Happened After the Fights

What happened to Street Fighter characters après combat?  This series of illustrations gives you the sometimes sad, and other times inspiring scoop. 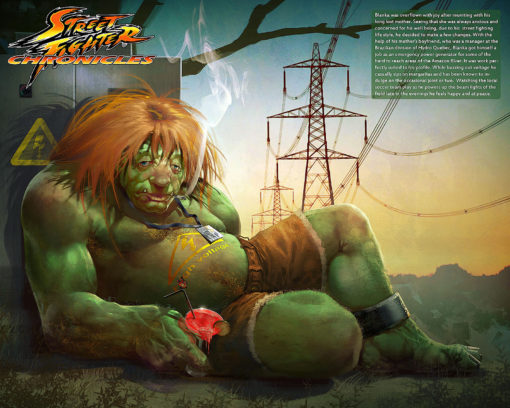 “Blanka was overblown with joy after reuniting with his long lost mother. Seeing that she was
always anxious and concerned for his well being, due to his street fighting life style, he decided
to make a few changes. With the help of his mother’s boyfriend, who was a manager at the
Brazilian division of Hydro Quebec, Blanka got himself a job as an emergency power generator
for some of the hard to reach areas of the Amazon River. It was work perfectly suited to his
profile. While buzzing out voltage he casually sips on margaritas and has been known to indulge
on the occasional joint or two. Watching the local soccer team play as he powers up the beam
lights of the field late in the evening he feels happy and at peace.” 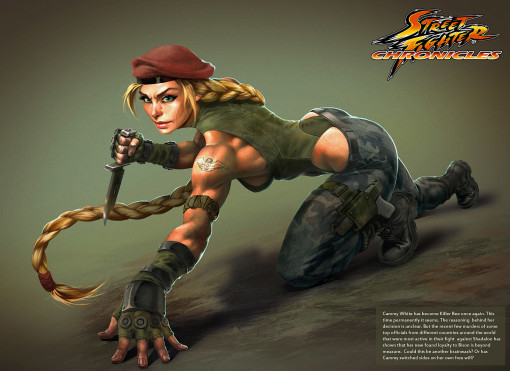 “Cammy White as become Killer Bee once again. This time permanently it seems. The reasoning
behind her decision is unclear. But the recent few murders of some top officials from different
countries around the world that were most active in their fight against Shadaloo has shown that
her new found loyalty to Bison is beyond measure. Could this be another brainwash? Or has
Cammy switched sides on her own free will?” 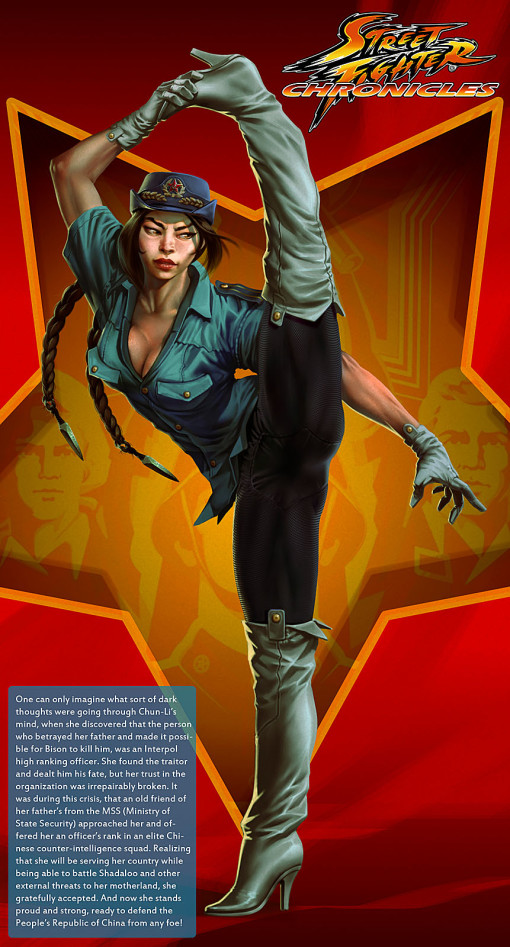 “One can only imagine what sort of dark thoughts were going through Chun-Li’s mind, when she
discovered that the person who betrayed her father and made it possible for Bison to kill him, was
an Interpol high ranking officer. She found the traitor and dealt him his fate, but her trust in the
organization was irreparably broken. It was during this crisis, that an old friend of her father’s
from the MSS (Ministry of State Security) approached her and offered her an officer’s rank in an
elite Chinese counter-intelligence squad. Realizing that she will be serving her country while
being able to battle Shadaloo and other external threats to her motherland, she gratefully
accepted. And now she stands proud and strong, ready to defend the People’s Republic of China
from any foe!” 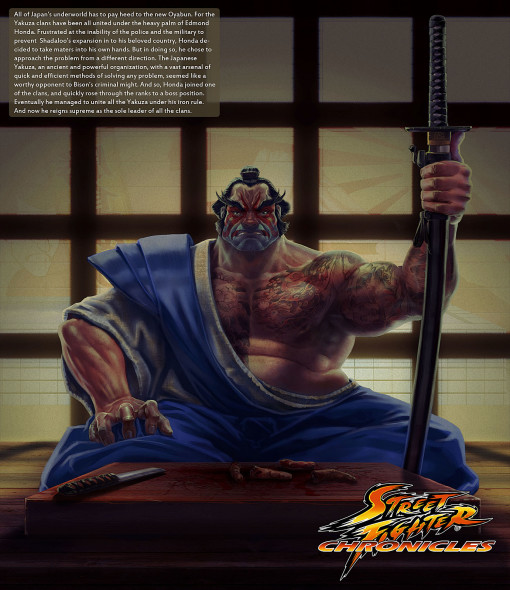 “All of Japan’s underworld has to pay heed to the new Oyabun. For the Yakuza clans have been
all united under the heavy palm of Edmond Honda. Frustrated at the inability of the police and
the military to prevent Shadaloo’s expansion in to his beloved country, Honda decided to take
matters into his own hands. But in doing so, he chose to approach the problem from a different
direction. The Japanese Yakuza, an ancient and powerful organization, with a vast arsenal of
quick and efficient methods of solving any problem, seemed like a worthy opponent to Bison’s
criminal might. And so, Honda joined one of the clans, and quickly rose through the ranks to a
boss position. Eventually he managed to unite all the Yakuza under his iron rule. And now he
reigns supreme as the sole leader of all the clans.” 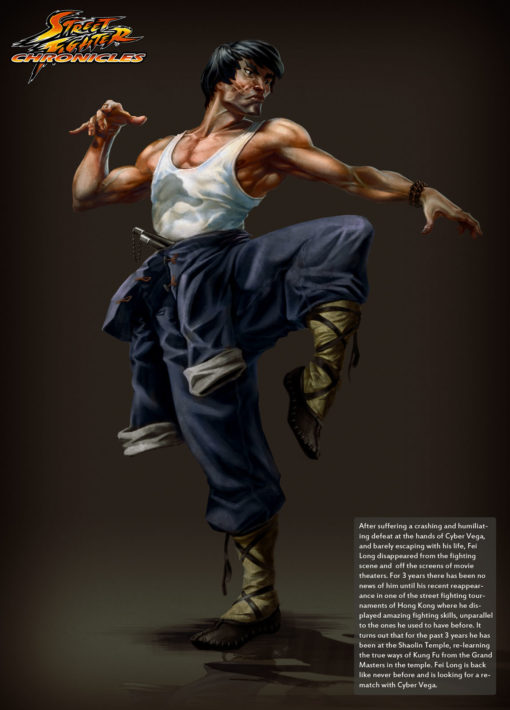 “After suffering a crushing and humiliating defeat at the hands of Cyber Vega, and barely escaping
with his life, Fei Long disappeared from the fighting scene and off the screens of movie theaters.
For 3 years there has been no news of him until his recent reappearance in one of the street
fighting tournaments of Hong Kong where he displayed amazing fighting skills, unparallel to the
ones he used to have before. It turns out that for the past 3 years he has been at the Shaolin
Temple, re-learning the true ways of Kung Fu from the Grand Masters in the temple. Fei Long is
back like never before and is looking for a rematch with Cyber Vega.” 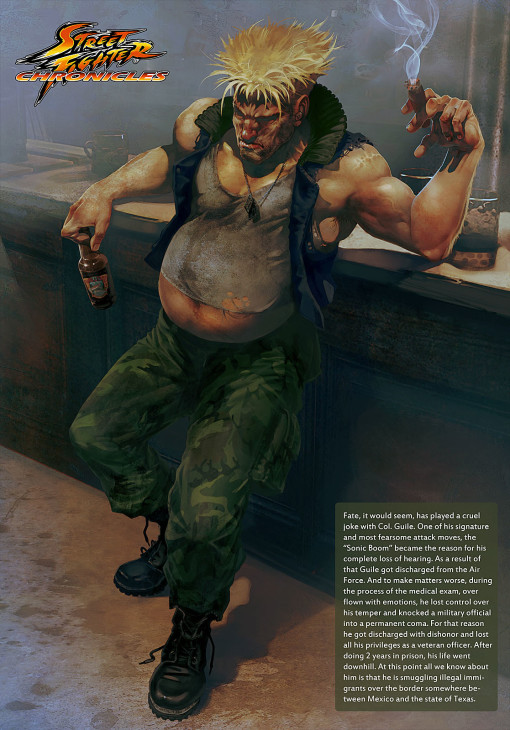 “Fate, it would seem, has played a cruel joke with Col. Guile. One of his signature and most
fearsome attack moves, the “Sonic Boom” became the reason for his complete loss of hearing.
As a result of that Guile got discharged from the Air Force. And to make matters worse, during
the process of the medical exam, over-flown with emotions, he lost control over his temper and
knocked a military official into a permanent coma. For that reason he got discharged with
dishonor and lost all his privileges as a veteran officer. After doing 2 years in prison, his life
went downhill. At this point all we know about him is that he is smuggling illegal immigrants
over the border somewhere between Mexico and the state of Texas.” 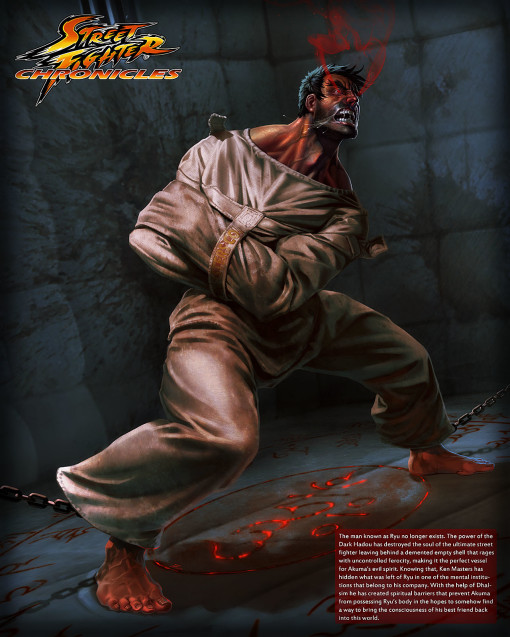 “The man known as Ryu no longer exists. The power of the Dark Hadou has detroyed the soul of
the ultimate street fighter leaving behind a demented empty shell that rages with uncontrolled
ferocity, making it the perfect vessel for Akuma’s evil spirit. Knowing that, Ken Masters has
hidden what was left of Ryu in one of the mental institutions that belong to his company. With
the help of Dhalsim he has created spiritual barriers that prevent Akuma from possessing Ryu’s
body in the hopes to somehow find a way to bring the consciousness of his best from back into
this world.” 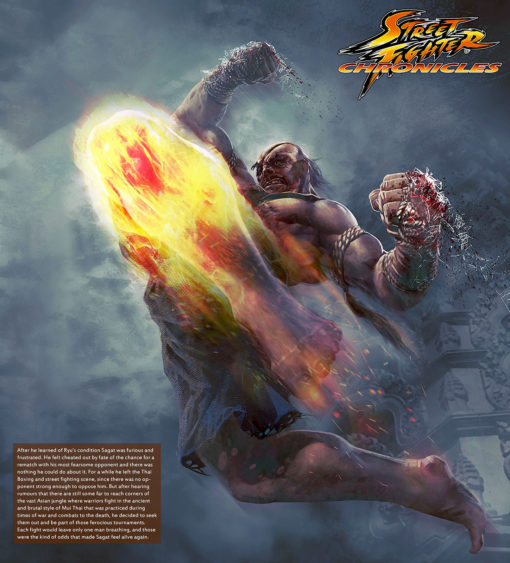 “After he learned of Ryu’s condition Sagat was furious and frustrated. He felt cheated out by fate
of the chance for a rematch with his most fearsome opponent and there was nothing he could do
about it. For a while he left the Thai Boxing and street fighting scene, since there was no
opponent strong enough to oppose him. But after hearing rumours that there are still some far
to reach corners of the vast Asian jungle where warriors fight in the ancient and brutal style of
Mui Thai that was practiced during times of war and combats to the death, he decided to seek
them out and be part of those ferocious tournaments. Each fight would leave only one man
breathing, and those were the kind of odds that made Sagat feel alive again.” 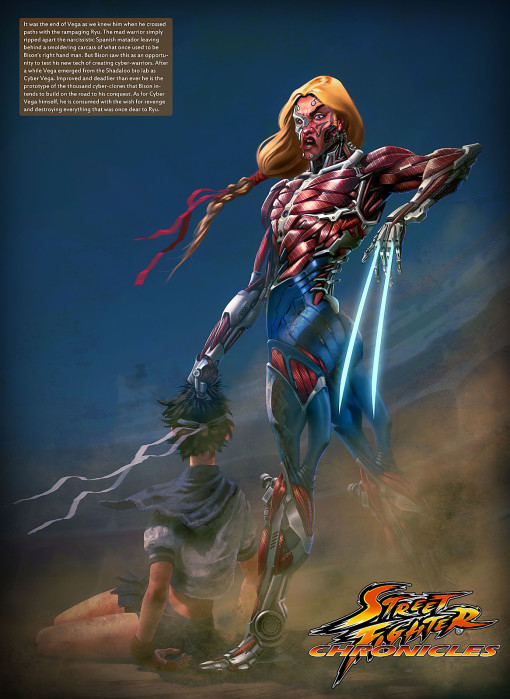 “It was the end of Vega as we knew him when he crossed paths with the rampaging Ryu. The mad
warrior simply ripped apart the narcissistic Spanish matador leaving behind a smoldering
carcass of what once used to be Bison’s right hand man. But Bison saw this as an opportunity to
test his new tech of creating cyber-warriors. After a while Vega emerged from the Shadaloo bio
lab as Cyber Vega. Improved an deadlier than ever he is the prototype of the thousand cyber-
clones that Bison intends to build on the road to his conquest. As for Cyber Vega himself, he is
consumed with the wish for revenge and destroying everything that was once dear to Ryu.” 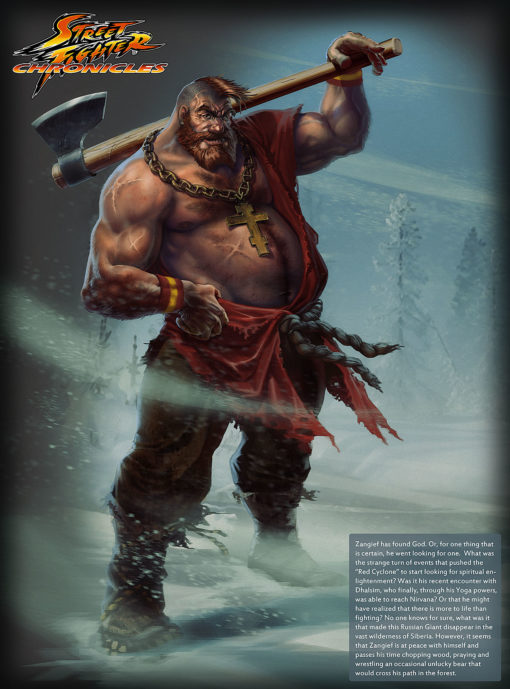 “Zangief has found God. Or, for one thing that is certain, he went looking for one. What was the
strange turn of events that pushed the “Red Cyclone” to start looking for spiritual enlightenment?
Was it his recent encounter with Dhalsim, who finally, through his Yoga powers, was able to reach
Nirvana? Or that he might have realized that there is more to life than fighting? No one knows for
sure, what was it that made this Russian Giant disappear in the vast wilderness of Siberia.
However, it seems that Zangief is at peace with himself and passes his time chopping wood,
praying and wrestling an occasional unlucky bear that would cross his path in the forest.”

Hats off to deviantART user Arman Akopian (I-GUYJIN-I)! As of June 15, he has plans to do the rest of the characters from Street Fighter 2, with the exception of T. Hawk and “maybe Akuma and 1 character of my own.” I personally can’t wait to see Akuma — he’s one of my fav characters to play with in the Street Fighter series, and another prime choice in Puzzle Fighter!

One Response to “Street Fighter Chronicles: What Happened After the Fights”